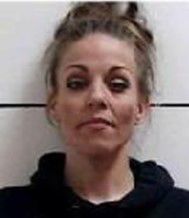 A Mooresville woman was among three people arrested in Yadkin County after deputies found two of them at a convenience store in Hamptonville Friday.

Karmen Jensen Buie, 23, of Mooresville and Brittany Renee Evans, 34, of East Bend, were each arrested on outstanding warrants, the Yadkin County Sheriff’s Office reported. Deputies were on routine patrol when they found Buie and Evans at the 7-11 in Hamptonville, the sheriff’s office stated in a news release.

During this incident, deputies received information that led to the arrest of Cory Ryan Parrish, 35, of Yadkinville.

Parrish, deputies reported, was found at a motel in Jonesville after it was learned he was also wanted on outstanding warrants for misdemeanor assault inflicting serious injury and failure to pay child support. Both were Yadkin County warrants, authorities said.