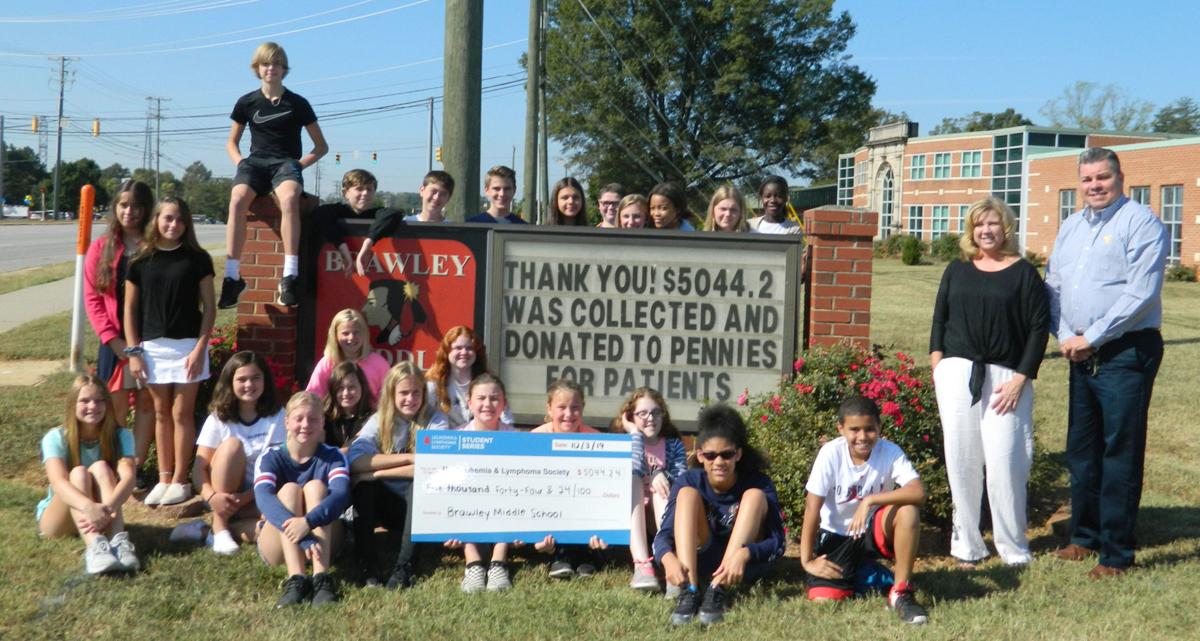 The WIN Community Service Class, along with teacher Laura Schweickert and Principal Jimmie Dancy, stand around the school sign announcing their grand total raised for Pennies for Patients. 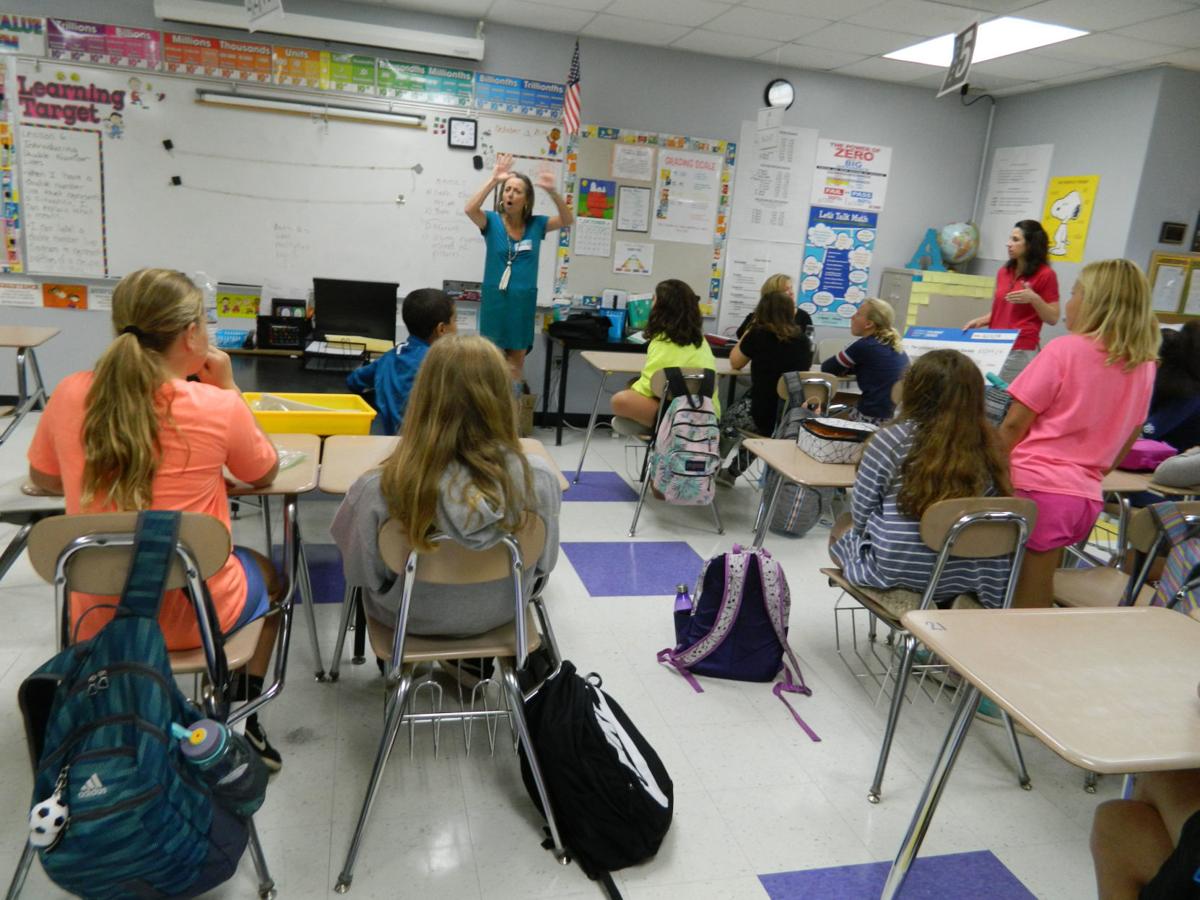 Campaign Specialist Robin Shaw shares a story with the class as they and school counselor Dana Overcash, (far right) listens. 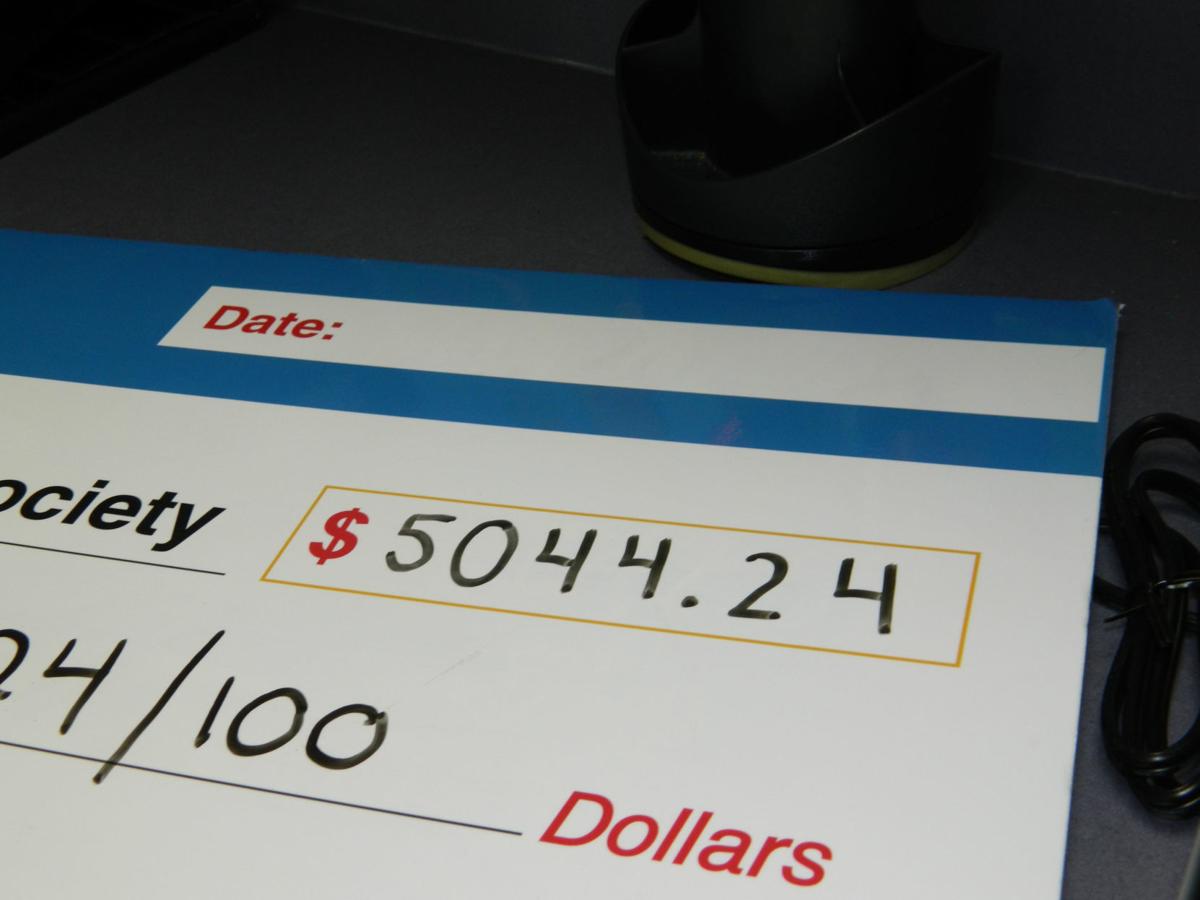 An up close look at the check total raised by the students for the Leukemia and Lymphoma Society.

The WIN Community Service Class, along with teacher Laura Schweickert and Principal Jimmie Dancy, stand around the school sign announcing their grand total raised for Pennies for Patients.

Campaign Specialist Robin Shaw shares a story with the class as they and school counselor Dana Overcash, (far right) listens.

An up close look at the check total raised by the students for the Leukemia and Lymphoma Society.

The students and staff at Brawley Middle School in Mooresville were definitely counting their pennies and, in doing so, they were able to raise $5,055.24 for the Leukemia and Lymphoma Society of North Carolina’s Pennies for Patients Campaign.

The idea of helping with this campaign began with Robin Shaw, campaign specialist for Pennies for Patients, and expanded to include Brawley Middle School Principal Jimmie Dancy and guidance counselor Dana Overcash.

Overcash said that she shared the idea with the school’s WIN (What Individuals Need) Community Service class, led by sixth-grade teacher Laura Schweick- ert, and they were “eager to help.”

Wanting to get the campaign going so it could coincide with Blood Cancer Awareness Month, which was September, they had to work quickly to get the project underway and start collecting.

The students in the WIN class did just that as they made posters and put out lots of signs to inform everyone at the school and to motivate them to donate for the cause.

When asked how they decided on this particular fundraiser to help, Conner Robillard, a member of the WIN class, said “we want to help, wanted to be kind and caring.”

Shaw was on hand at the school on Oct. 3 for the big celebration along with the passing of the check for the Leukemia and Lymphoma Society.

She was excited for the students and their hard work.

“You set a goal, got together in a few short days, and you rocked it,” Shaw told the WIN class.

“I’m excited the kids got excited and inspired,” Overcash said.

Every homeroom class in the school contributed to help the school not only reach its goal of $4,000 but to also surpass it.

During Shaw’s visit, she told the class a story of how their giving can help a cancer patient.

Excited and thankful for their generosity and giving, she told them, “Brawley Middle School is going to be my example. Brawley stepped way up.”

The homeroom that raised the most money was awarded a free lunch courtesy of Olive Garden. Claiming the honor was Jill Hoffman’s eighth-grade class with a total of $879.23.

Two students in particular raised money, Hoffman said, and pushed the momentum in the class, which gained speed and became infectious and very competitive, she said.

Hoffman said she encouraged everyone in the class to give something and told them they all “needed to be a part of the winning process if they wanted to go.”

Schweickert wrote in an email that “these are all great accomplishments, but most important of all, Brawley has proven that they indeed are brave enough to fight childhood cancer. Every penny does count when trying to find a cure. We should all be proud of this.”

“It is great what was done over the two-week period,” Dancy said. “It’s really great their caring about childhood cancer. It’s a tribute of the school. I’m very proud of the kids and what they have done.”

In an email, Shaw wrote that “the team at the Leukemia and Lymphoma Society of North Carolina is so grateful and thrilled to have these amazing young people and school staff as partners.”

She also expressed her gratitude for the “fantastic donation to our mission to cure blood cancers and provide help and hope to every patient that we serve.”