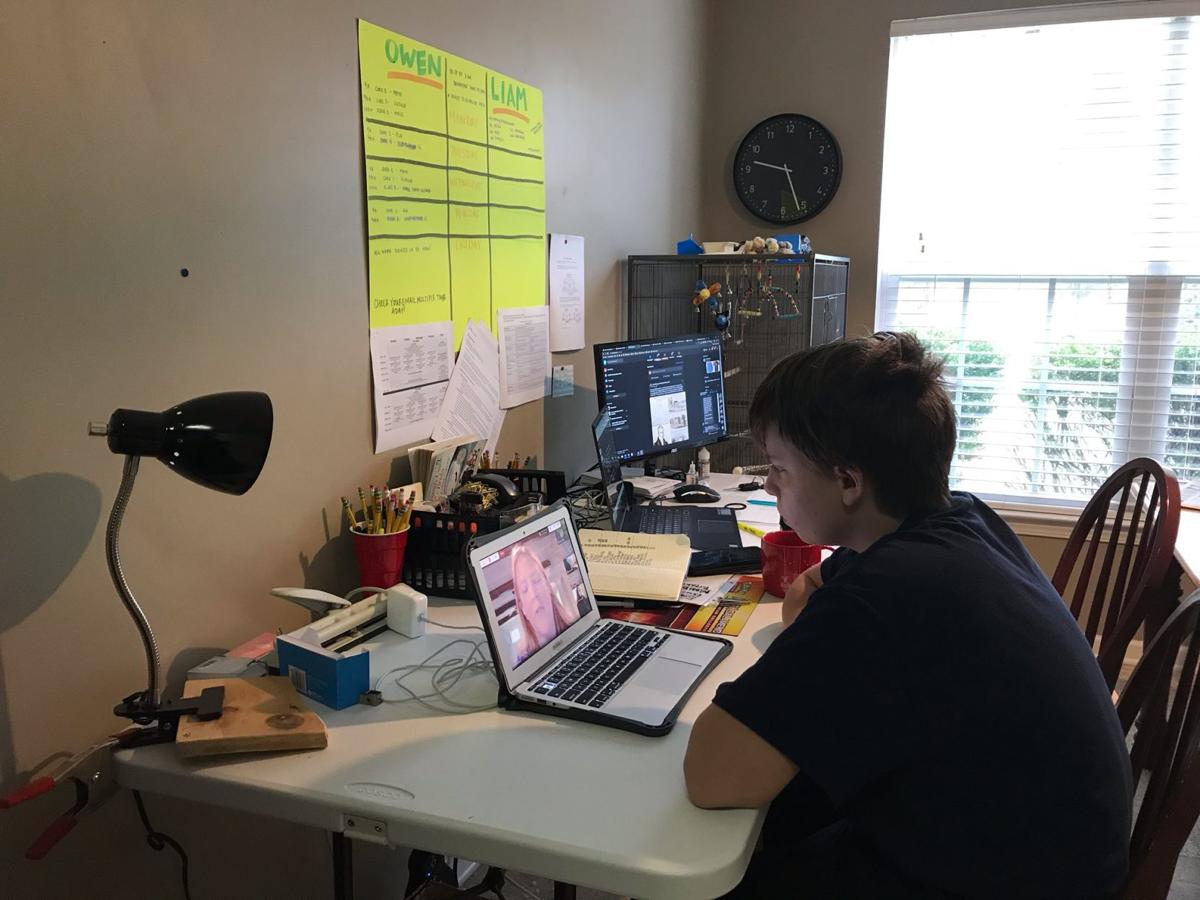 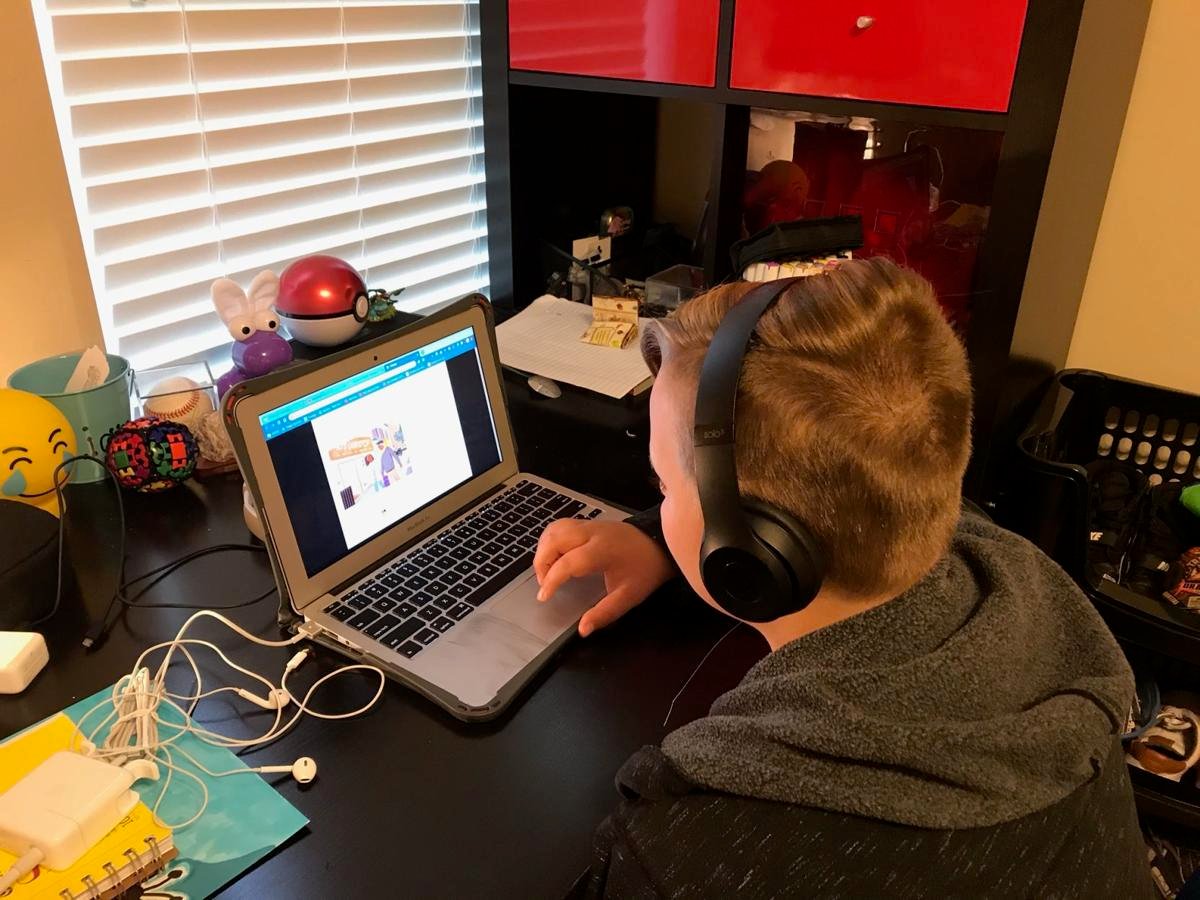 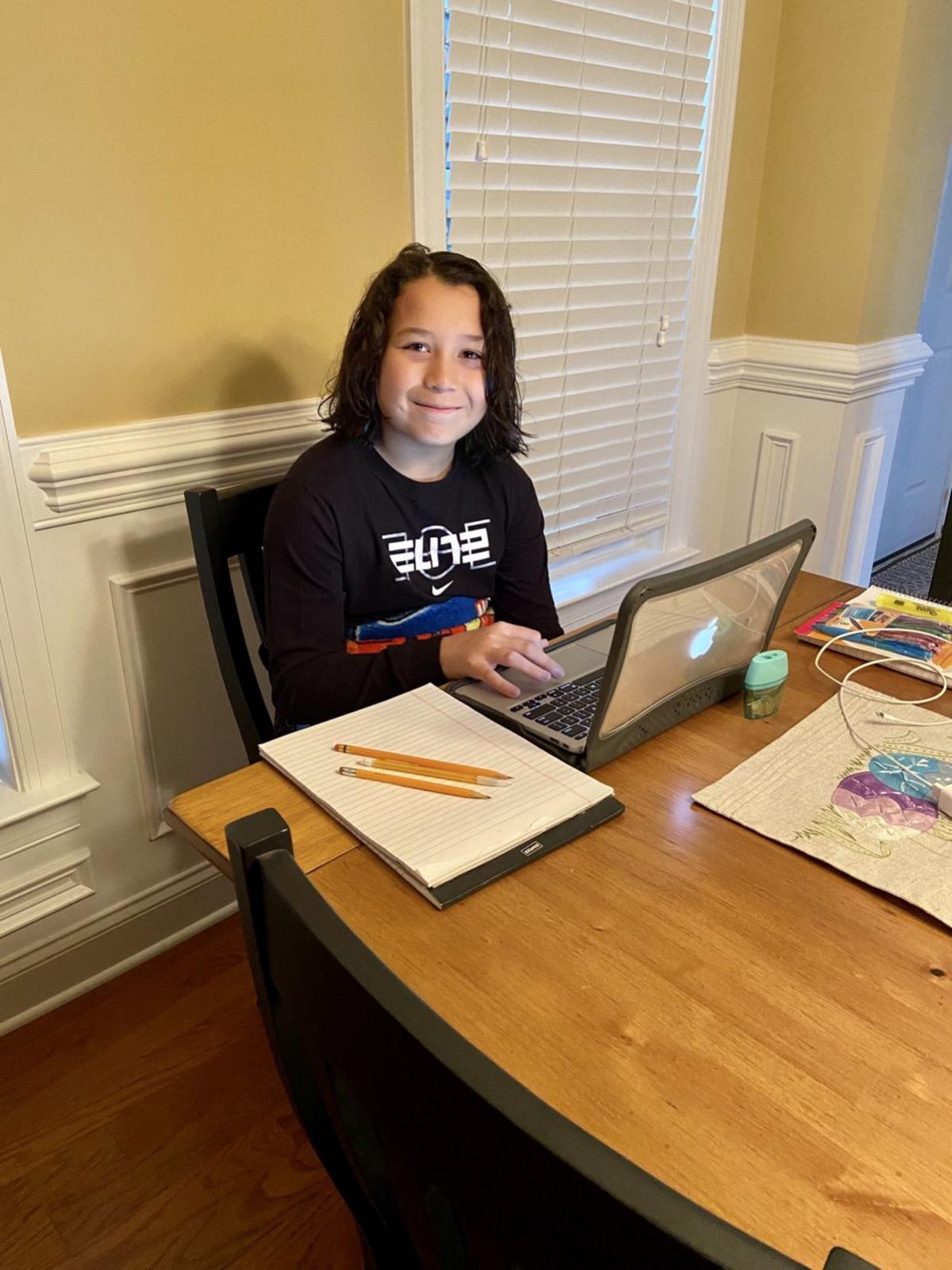 Owen Hook smiles during the first day of virtual learning. 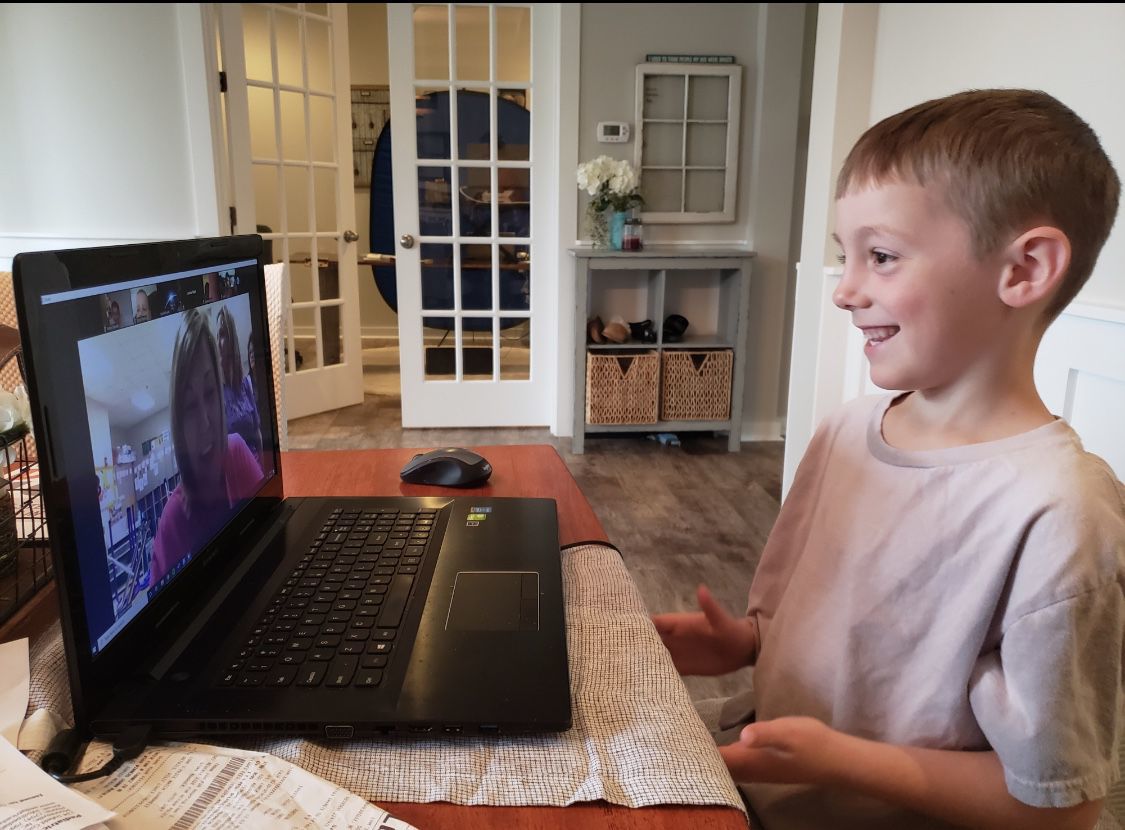 Owen Hook smiles during the first day of virtual learning.

For most students in Iredell County, March 23 marked the shifting from the classroom with an in-person environment to a virtual one.

And now almost a month into the educational landscape that’s been molded by COVID-19, both students and their caretakers are finding footing in the fallout.

Mooresville resident Anne Drury works in recruiting and has two sons; one in middle school and the other in elementary school.

That new normal is finding times when her work schedule doesn’t collide with her child’s education. Drury is lucky enough to be working from home, but their internet connection has become a strained commodity. She’s had to schedule her work meetings happening over the conference app Zoom for the afternoon so her kids can use Google Meets to interact with teachers in the morning.

She explained running everything at once chews up the bandwidth. Drury added she starts her work day earlier and ends it later, saying she now works mostly in chunks.

Although things are running relatively smoothly at home now, it came with a bit of hand holding. Drury described the first few days of remote learning as a chaotic series of making sure her kids could navigate the programs and materials teachers had set up for them.

“It hasn’t been extremely tough for (my kids) in terms of content,” she said. “It’s more they’ve got to manage their time effectively. It’s a very adult approach.”

One person who’s enjoying the change is Teresa Keller. She lives in Statesville with her son and grandson, Roland, who’s in his first year at East Iredell Elementary. Roland is enrolled in the school’s dual immersion program, a language program allowing students with bilingual backgrounds to receive academic instruction in English and Spanish, the school’s website states. The program is designed to develop literacy in both languages.

Roland is quite the talker.

“He’s either going to grow up to be a politician or a lawyer,” Keller said.

Keller said Roland’s father works late nights and sleeps most of the day, so she’s charged with making sure he gets his schoolwork done along with tending to any other needs he may have. She likes the busy schedule that goes with looking after a young child.

Overall, Keller said she’s been impressed with schoolwork the middle school has provided for Roland. He’s been working out of a mixture of paper packets and online materials, doing things like summaries and plot outlines of literacy work.

“It’s amazing what they ask a first-grader to do,” she said.

Keller added she’s fortunate to have access to a printer so Roland can print out anything he needs. She also said she’s making sure he’s getting what exercise he can; they live at the end of a dead-end street, so there’s some space for him to run around.

There is one person remote learning feels fairly familiar to. Nathan McGowan is 16 years old and a sophomore at Mooresville High School. He suffers from Selective IgA, an immune deficiency the Mayo Clinic describes as a condition in which the body doesn’t produce enough proteins that fight off infection.

McGowan’s condition left him with such a weakened immune system that he was forced to do home-based learning from sixth through eighth grade. He also missed 45 days of school during his freshman year at Mooresville High.

Aleha McGowan, Nathan’s mother, said the family was used to having him learn from home.

“With IgA, the seasonal flu is basically a guarantee for me,” Nathan McGowan explained.

McGowan had pulled her son home due to fears of infection even before the Mooresville Graded School System had instituted online learning.

But schools closing in response to the pandemic still caught him by surprise.

“The initial shift online was a little jarring,” Nathan said. “You go from seeing your teachers five times a week to twice a week for an hour.”

And while much of this might feel like a repeat experience for McGowan, he said he’s seeing friends go through a culture shock by having their after school plans canceled. That’s on top of not being able to see friends face to face.

McGowan still talks to friends through video games like he did before the pandemic. Aleha McGowan said she is thankful for his Playstation system offering him some stand-in for a social life while her son was home bound. Nathan McGowan did mention the interaction feel a little bit different now.

He said the same thing is true of social media accounts; he’s seeing people flocking to the internet just to get some form of human interaction.

Also nagging at McGowan is the fact that he’s more at risk of infection due to his compromised immune system.

“If Nathan were to catch this virus it would definitely hospitalize him or worse,” Aleha McGowan said. “Our biggest fear is me or my husband bringing something home.”

Aleha still has her job as a truck dispatcher in Charlotte and said she’s able to maintain social distancing while at work. McGowan’s father is a boiler technician and had a service call at a hospital recently. He said that scared him.

“My fear is exactly getting the virus, but adding to the workload doctors already have,” McGowan said.

One constant among parents is the fear of what their children may be missing out on. Andy Perovic’s daughter Sarah is a fifth-grader at Troutman Elementary School. He said she really misses her teacher, friends and playing soccer.

Perovic cited one of his main concerns is his daughter isn’t getting to practice the soft social skills that accompany being a student, saying that school is everything from test-taking to sitting on bleachers during a pep rally.

Since schools closed, Perovic said he spends roughly an hour or so a day helping his daughter with schoolwork, but admits he’s not much of an educator.

“Nothing can replace a teacher that’s in the classroom five (or) six hours a day,” he said. “So now her education is all on her.”

That’s something both Aleha and Drury echoed, saying they have fears remote learning may be leaving gaps in their children’s education.

“Is he going to have accurate knowledge in the classes that he’s missing this semester?” Aleha worried.

Drury added that her seventh-grader was not accustomed to intense amounts of learning outside the classroom and wonders if her son will be playing catch-up next year.

“I think next year’s testing might tell big stories,” she said.