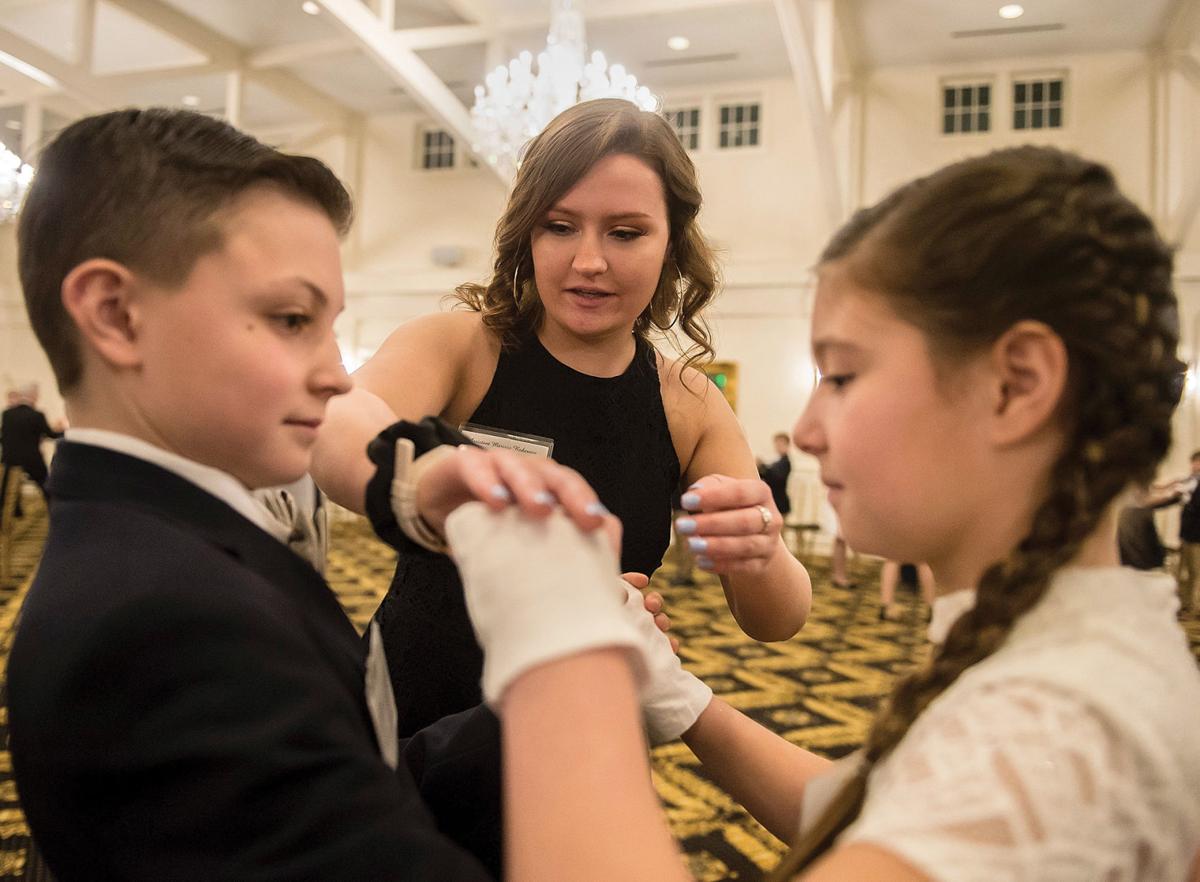 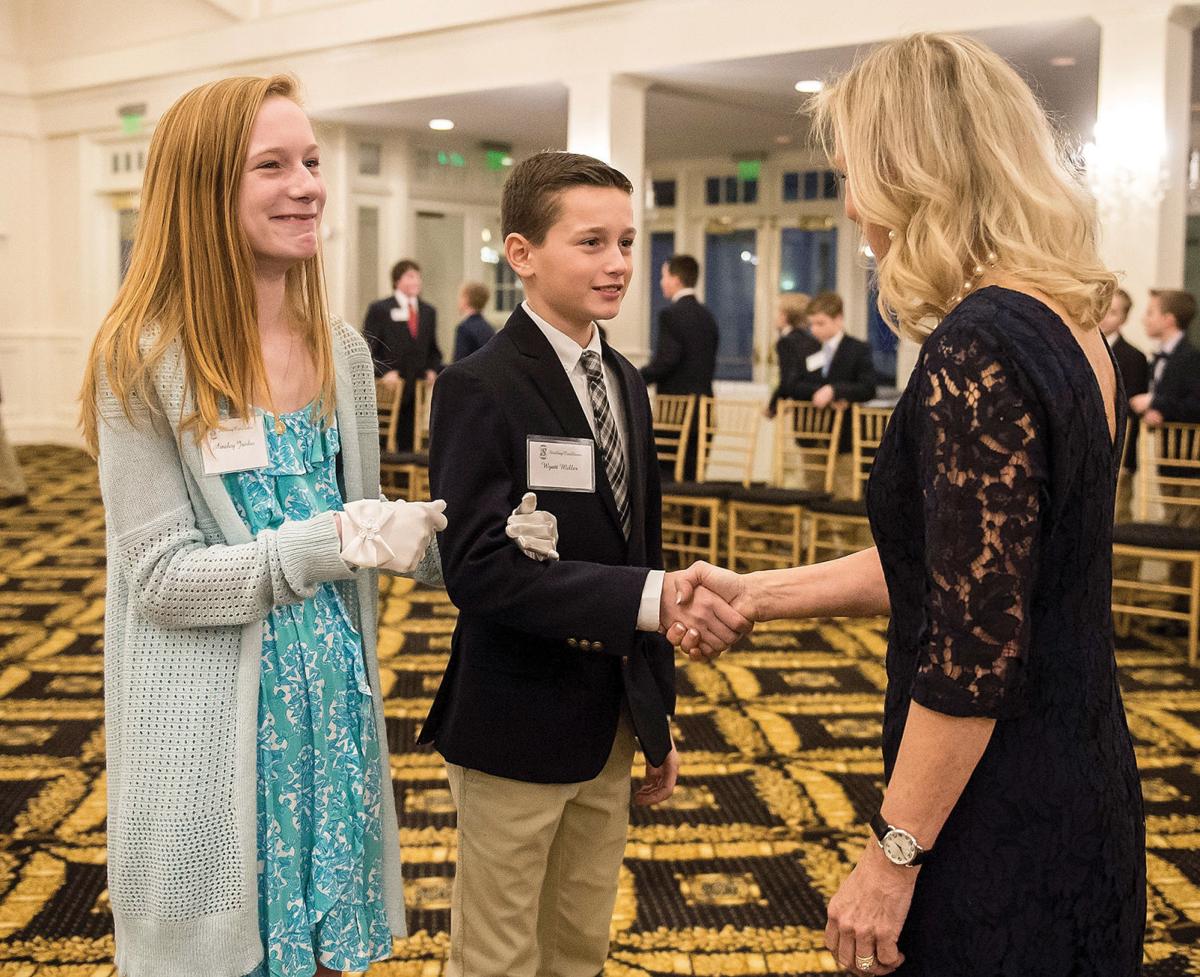 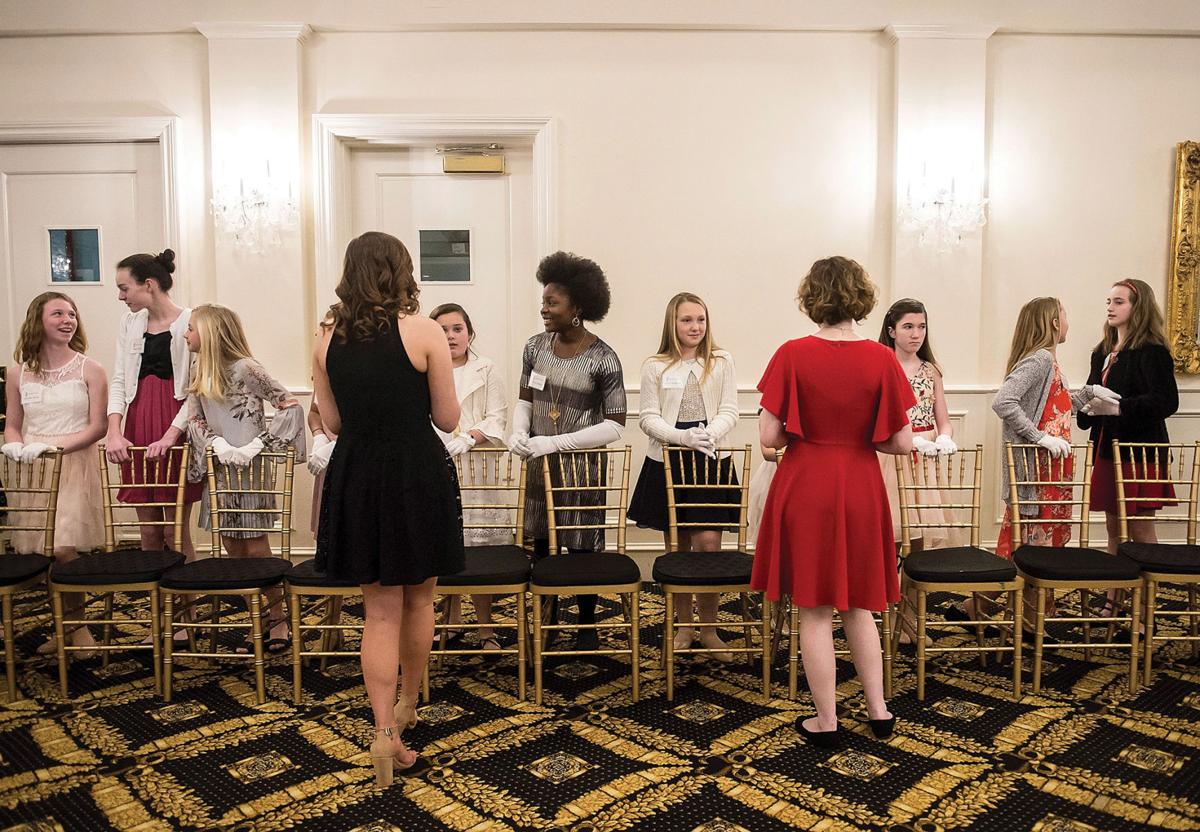 Students wait for the start of a Sterling Cotillions class at Trump National Golf Club Charlotte on Sunday in Mooresville. 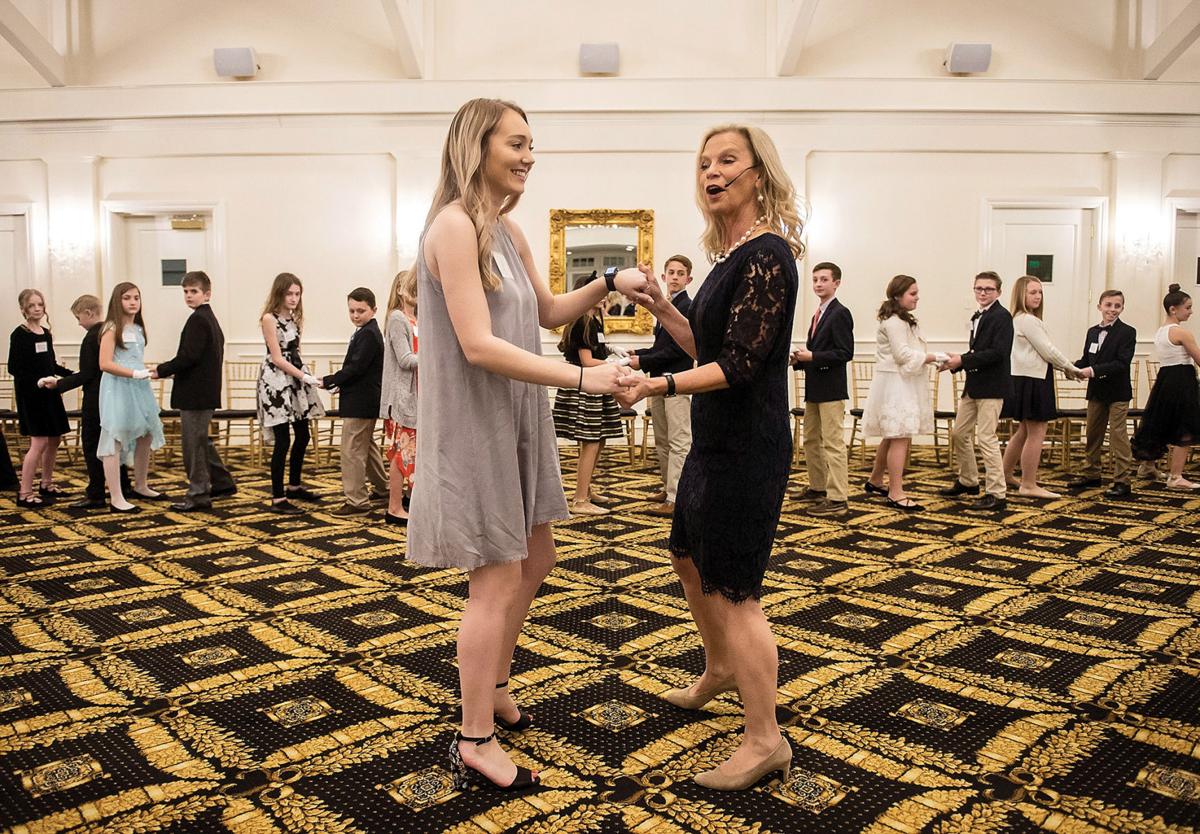 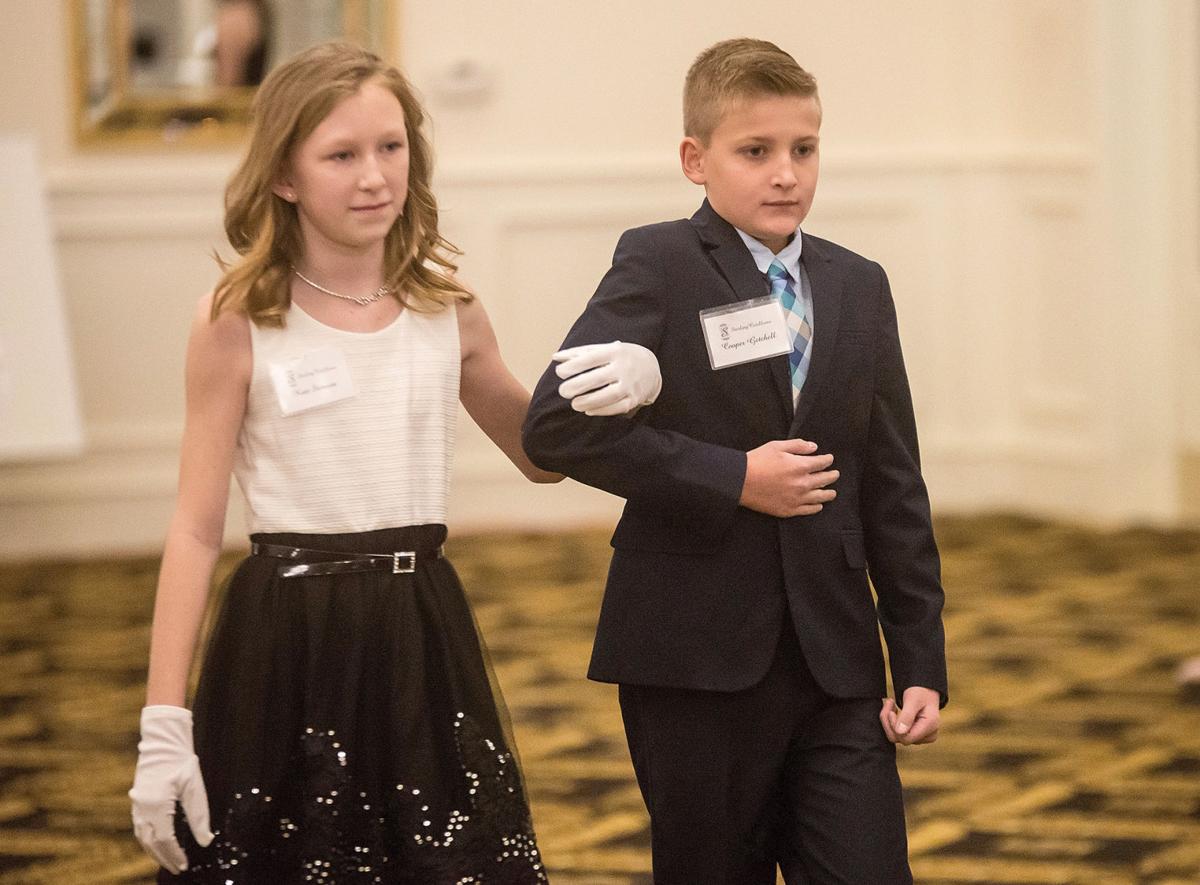 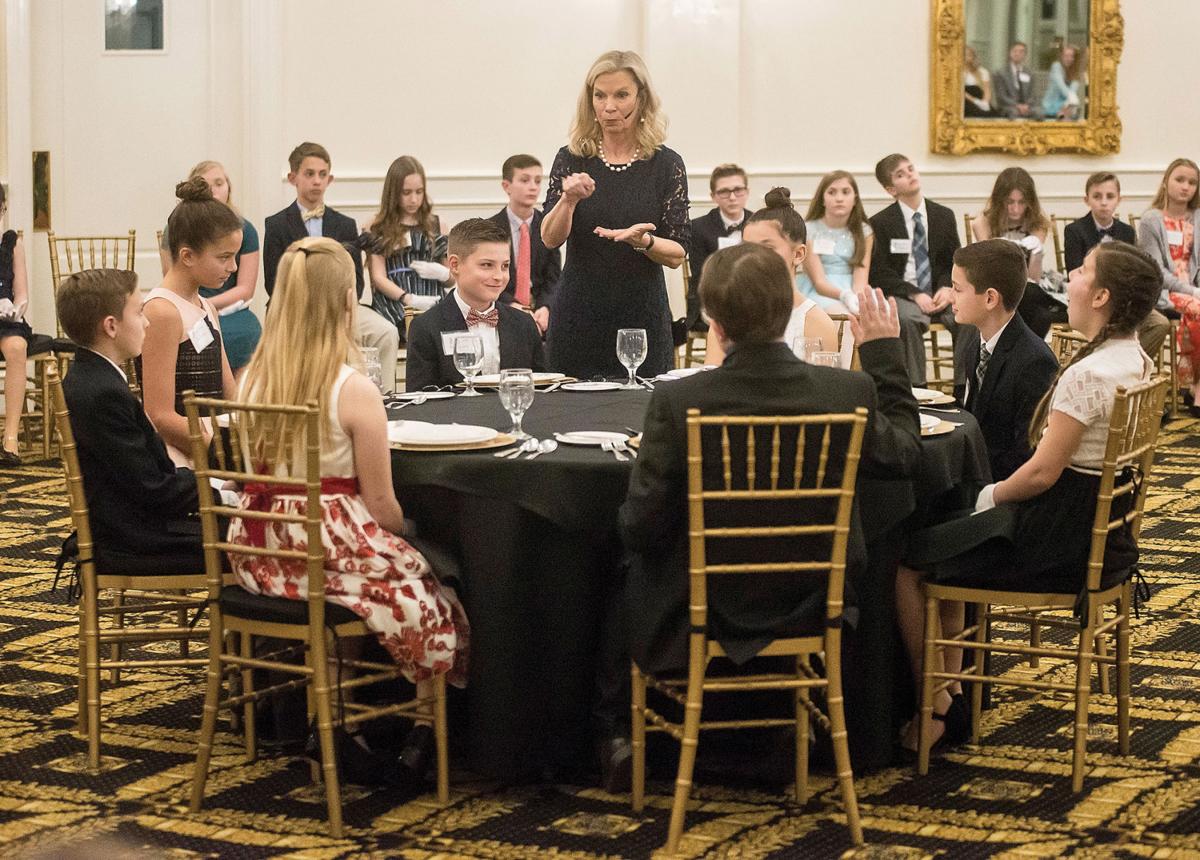 Students wait for the start of a Sterling Cotillions class at Trump National Golf Club Charlotte on Sunday in Mooresville.

Each wearing a dark suit and tie or navy blazer with khaki pants, the young gentlemen held out their arms to escort their companions, tween girls wearing dresses and white gloves. The boys slowly accompanied the girls to their seats and then crossed the ballroom to stand behind their own chairs opposite the girls.

There was fidgeting among the boys and whispering and smiles between the girls as the Sterling Cotillions Class at the Trump National Golf Club ballroom filled but, for the most part, the near 75 students were quiet.

David and Melanie Shippee, the husband and wife team behind Sterling Cotillions, walked past the respective lines of children initiating small talk and performing last-minute inspections. Shoes were tied, buttons were buttoned and name tags were fastened.

“Good evening, gentlemen, how are you?” Melanie Shippee calls out with a bright smile. “You’re looking very sharp!”

“Any of you have chewing gum?” David Shippee strode past the boys quickly glancing at mouths but there were no offenders that night.

The boys and girls of this class, all fifth- and sixth-grade students, soon paired off and were instructed on the art of a firm handshake and proper introduction before they formally met their partner and then together greeted the Shippees. Seventh- and eighth-grade students attended the class later in the night.

“It’s the great equalizer,” said Melanie Shippee, 60. “If you have wonderful manners, it can open doors that no amount of money can.”

And local parents, perhaps seeing an increased need for their children to get off their respective devices and actually interact with other human beings, are flocking to cotillion like never before.

Melanie Shippee says she has to turn away boys and girls from her Mooresville cotillion because the demand is so high.

“Manners are starting to become more important to people again because we’ve gotten so casual in our everyday lives,” she said.  “Everything is ultra casual, too casual.”

Last June, an annual poll by global communications and marketing service Weber Shandwick and Powell Tate reported 93 percent of Americans agreed the country has a civility problem with 69 percent classifying it as a “major” problem.

Held annually in mid-winter, tweens and teens register to attend the five sessions of classes offered by Sterling Cotillions. In just one class on Jan. 27, the students learned table manners, lessons like holding the door open and writing thank you-notes and an easy two-step dance that allowed them to practice their introductions and handshakes with different partners.

“If you know expectations, social expectations particularly, if you’re armed with how to handle that, life is just easier,” she said.

Making a good first impression with good manners will not only help children socially but in the workforce as they grow up, said Aimee Symington, CEO and founder of Finesse Worldwide. Symington, 51, has taught children and adults etiquette and social skills for nearly 20 years and began “Impressions: The Modern Cotillion for a New Generation” five years ago.

Held at Langtree Plantation in Mooresville, the classes, held on March 10, March 24 and April 7, will teach teens conversation skills, table manners, how to show respect and kindness and the waltz, Symington said.

“I think going back to reminding people how to treat people with respect and kindness when you are in person and using electronics is extremely important,” said Symington.

Symington has adapted the traditional cotillion into a more modern one with an additional focus on texting, emails and social media, she said. Students are taught how to use the Internet as a tool, not a weapon, she said. Students are also taught, for example, the proper greeting and closing of an email and what is appropriate to send in emails to adults.

Spoiler: Emojis are appropriate for texting friends but not when emailing your teacher or professor, Symington said.

Manners are more important than ever with technology a part of our daily lives, Symington said. Those who have the social skills, in addition to technology skills, are going to be more successful because manners and etiquette are becoming increasingly rare.

“They’re actually going to be the ones who are going to become more successful because they have those other skills so it’s even more important now,” Symington said.

During Symington’s first two cotillion classes, students are not required to dress up but during the final class, girls must wear a dress and boys a tie, she said.

Joanna Kunz, 51, owner of Today’s Cotillion, will begin her spring cotillion session on March 23 at Huntersville United Methodist Church. The five 90-minute classes end with a semi-formal on May 3 and the students are taught dancing, manners, eye contact and how to begin a conversation, Kunz said.

“Cotillion is not about the dancing,” said Kunz. “I cannot emphasis that enough.”

However, the face-to-face communication skills learned while dancing are essential parts of the class, she said. “It is so important because it gives them confidence, it builds their confidence in face-to-face conversation. It makes them comfortable in unfamiliar situations.”

At any given class, between 10-15 Lake Norman-area schools, with students in sixth-ninth grades, are represented, Kunz said. This gives students a chance to practice interaction with people they may not know, a real-life skill they can use at their own school, she said.

“A lot of times these students are in schools where they have new kids coming to their schools or they’re the new kids,” said Kunz. “They’re very intimidated about going up to someone and starting the conversation.”

The students are taught skills Kunz believes they will actually use in life, including table manners that are relevant to them as pre-teens and teenagers. Students are asked to turn in their cell phones or devices upon entering class in order to encourage face-to-face communication, she said.

Boys are required to wear slacks and a collared shirt and girls a skirt to all classes except the semi-formal when boys should wear a tie or jacket and girls a dress, she said.

Usually, the decision to attend cotillion is not the student’s idea.

Hamilton Coleman and Sofia Rodyk, both 10 and students at Langtree Charter Academy, said it was their respective parents’ idea for them to attend Sterling Cotillions. Rodyk admitted she was having fun, though, because several of her friends attended with her.

Dancing with the opposite sex was the most uneasy part of the lessons, they both agreed.

Two former students have already learned the benefits of cotillion.

Kacey Burke, 18, of Davidson, a senior at Community School of Davidson, and SeRi Jung, 15, of Mooresville, a sophomore at Lake Norman High School, serve as assistants at Sterling Cotillions where they help answer questions and interact with the students and parents.

Both young women took cotillion with the Shippees several years ago.

Jung believes cotillion classes have not gone out of style and are still important. “I think so because this generation is losing etiquette and manners overall,” said Jung.

“Figuring out how to really interact with somebody in person is super difficult for people nowadays,” said Burke.

Jung has become less shy and more willing to be a leader in class because of the skills she’s learned at cotillion, she said.

For Burke, learning valuable skills in cotillion has paid off in real life experiences as she weathers job and college interviews.

“'Wow, I just introduced myself and shook someone’s hand',” Burke said she recalls thinking recently. “I never would have known how to do it without it.”

Shaking hands is a habit Burke just can’t break, even among people her own age.