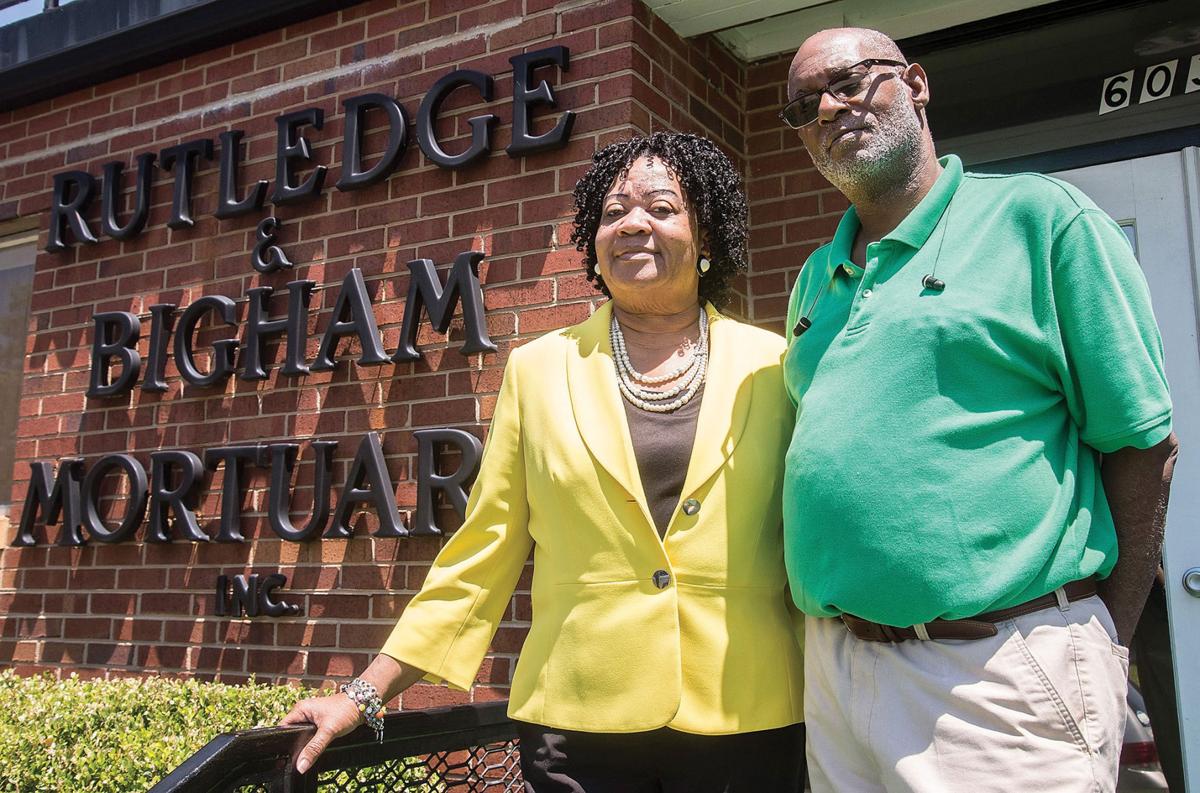 Funeral directors Bernardeane Moton and David Moton pose for a portrait on Wednesday at Rutledge and Bigham Mortuary. 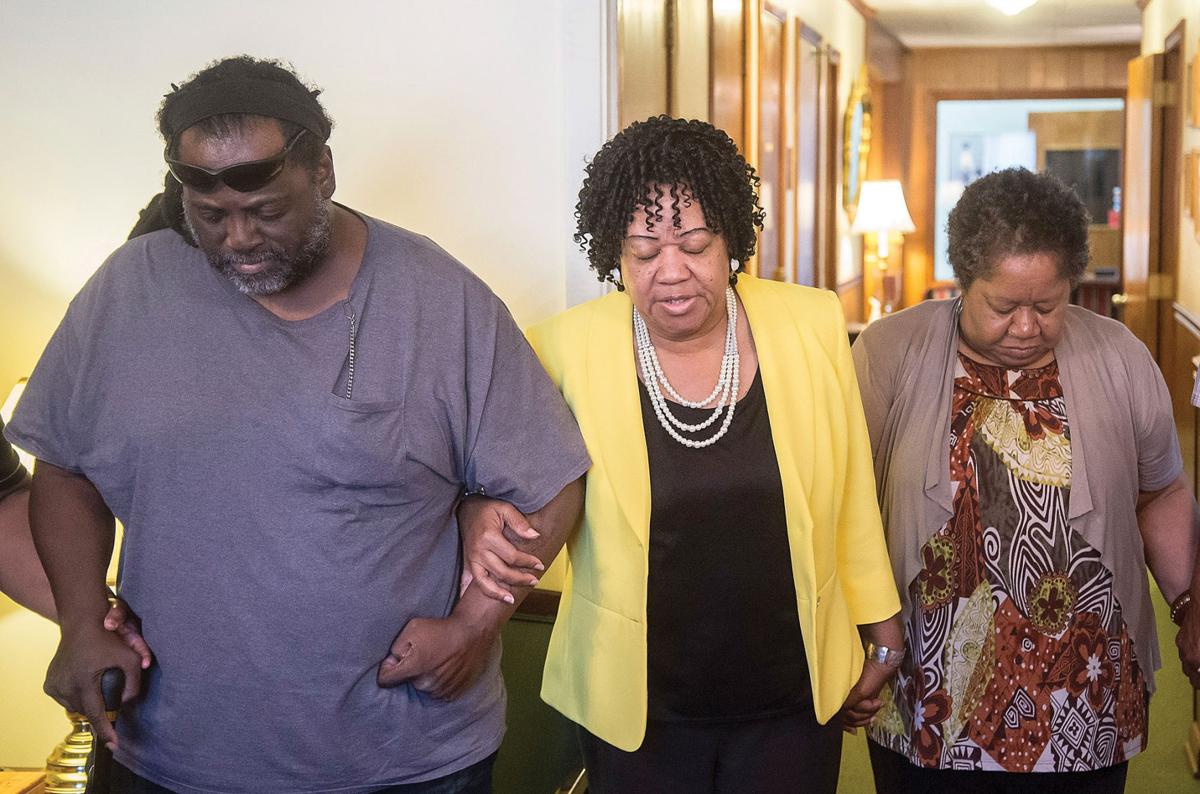 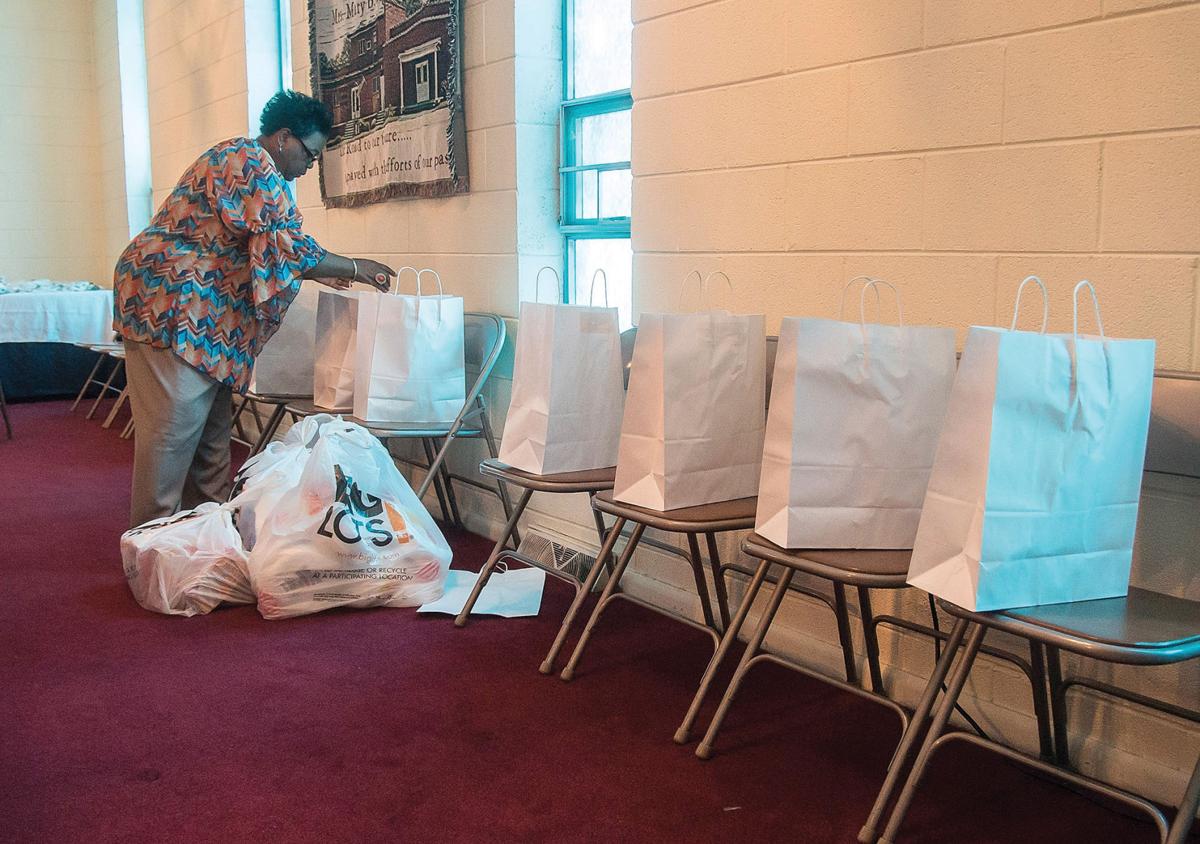 Billie Stewart packs bags with plates, cups and plasticware for families who have lost a loved one on Wednesday at Rutledge and Bigham Mortuary. The bags are there to help the families when they are receiving people at their home following the death of a loved one. 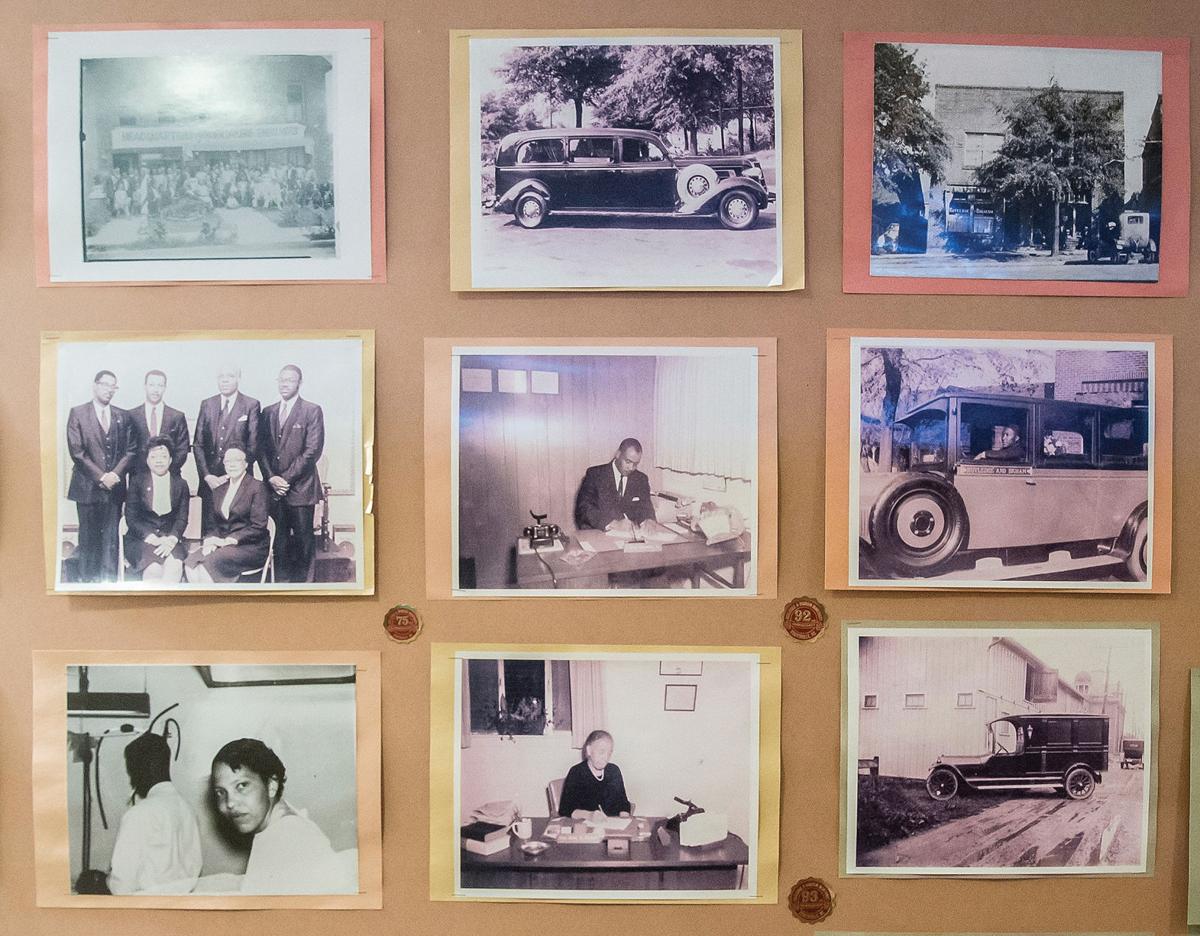 Historic photos hang on the wall at Rutledge and Bigham Mortuary on Wednesday. 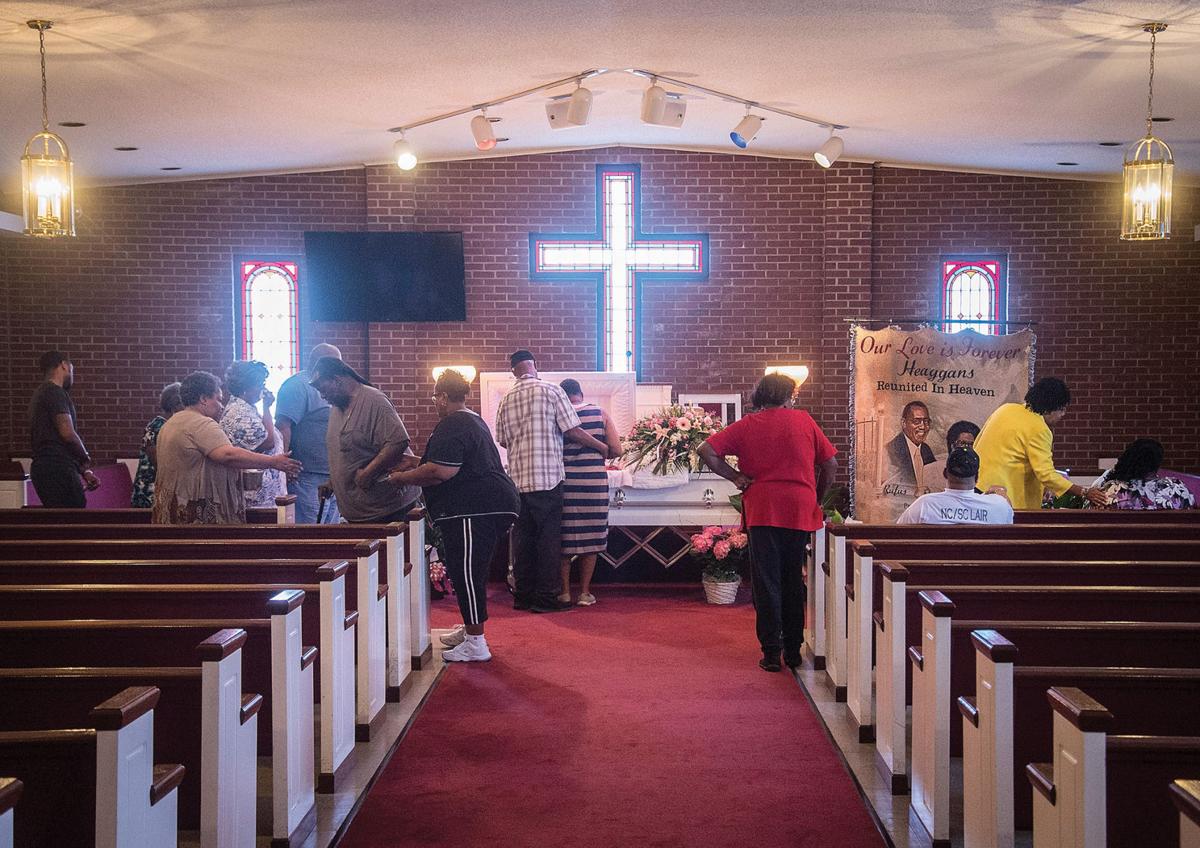 Family members and loved ones view Catherine Miller Heaggans on Wednesday at Rutledge and Bigham Mortuary.

Funeral directors Bernardeane Moton and David Moton pose for a portrait on Wednesday at Rutledge and Bigham Mortuary.

Billie Stewart packs bags with plates, cups and plasticware for families who have lost a loved one on Wednesday at Rutledge and Bigham Mortuary. The bags are there to help the families when they are receiving people at their home following the death of a loved one.

Historic photos hang on the wall at Rutledge and Bigham Mortuary on Wednesday.

Family members and loved ones view Catherine Miller Heaggans on Wednesday at Rutledge and Bigham Mortuary.

Rutledge and Bigham Mortuary will celebrate its 95th anniversary in June.

The family-owned business has been a Southside landmark since Gadson G. Bigham and St. Charles Rutledge started offering their services in 1922.

Funeral home customers are often dealing with shattering losses. Rutledge and Bigham prides itself on being a calm in the storm of death.

Gadson’s wife, Mary Belle Bigham, told her daughter, Louise Moton, that from day one the mortuary’s goal was to serve families, Louise recalls.

It takes a special mindset to be a funeral director -- it requires patience, understanding and love.

Current operators continue to see Rutledge and Bigham as a ministry first and a business second.

“Serve the family first,” said chief operating officer Bernadeane Moton. “After that, God will take care of us.”

PART OF THE COMMUNITY

Like churches and barber shops, the funeral home has always been a magnet for black social life, David Moton said. He remembers being a kid and watching a steady stream of residents stop by for chats during business hours.

Before buses ran Southside routes and cars were common, people had to walk to downtown from the Shelton Avenue, and the mortuary would serve as a rest stop, said Louise Moton, who ran the mortuary from 1971 until Bernardeane took over in 2012. Louise is David Moton’s mother.

Mary Belle Bigham had opportunities to expand elsewhere with more land, but decided to stay ingrained in the Southside and Depot Hill community.

Today, the doorbell still rings regularly, if for different reasons.

The business has expanded beyond just funerals. They also offer a notary service, insurance, educational seminars, paper work help for senior citizens -- anything for their beloved community.

‘EVEN IN DEATH, LOVE IS FOREVER’

Walk through the mortuary doors and you’re immediately greeted by staff and offered a seat with a view of the chapel.

If someone has recently passed, spiritual music plays to help calm mourning friends and family.

Rows of certificates from the North Carolina State Board of Mortuary Science, from the 1920s to present day, hang above Bernardeane’s desk as a testament to the operation’s professionalism.

The mortuary offers restorative services to give the deceased the look of peaceful rest. Keepsakes like a printed blanket or memory video provide visuals of the life lost.

Rutledge and Bigham offered memory videos before they became common, Bernardeane said. Workers would tape photos of the deceased to the wall and film a montage with a crank camera.

The mortuary also cares for the immediate emotional needs of families.

David told how he uses a match to explain death to children. He’ll light it, let the flame burn a second, then blow it out. He tells them the smoke is like the spirit leaving the body.

Bernardeane said the mortuary tries to remember families during times the deceased is missed most.

“Even in death, love is forever,” Bernardeane said. “Death can’t take love from you.”

SERVICE AFTER THE CEREMONY

After Thanksgiving, they send families an ornament. At Christmas they erect a 12-foot memory tree that people decorate with remembrance ornaments. The tree becomes so packed it has to be tied down.

“When my father passed four or five years ago, we were so surprised to receive an ornament in the mail with his picture on it and all the details of his service,” said Dale Brooks, a customer whose family has used the mortuary for generations. “There are so many extra things the funeral home does to embrace you, to make you feel comforted and have you know you’re not alone.”

The Motons say Rutledge and Bigham will continue its ministry and service to the community as they draw closer to the century mark as a Statesville mainstay.

“It’s the desire to help people when they need it most,” Louise said. “It’s a family business and it has been since inception.”

Rutledge and Bigham Mortuary will gift handmade corsages today in honor of those “whose mothers are no longer with them” and “mothers who have lost a child or children.”

In June, the mortuary will host events celebrating the 95th anniversary.

Family Fun Day will be held from noon to 6 p.m. on June 24. The event will feature a variety of foods and games for children. A candlelit memorial service will also be held at 5:30 p.m. on June 25.

An independent scholarship review committee is currently determining the recipients of two $1,000 scholarships that will be awarded during the memorial service.