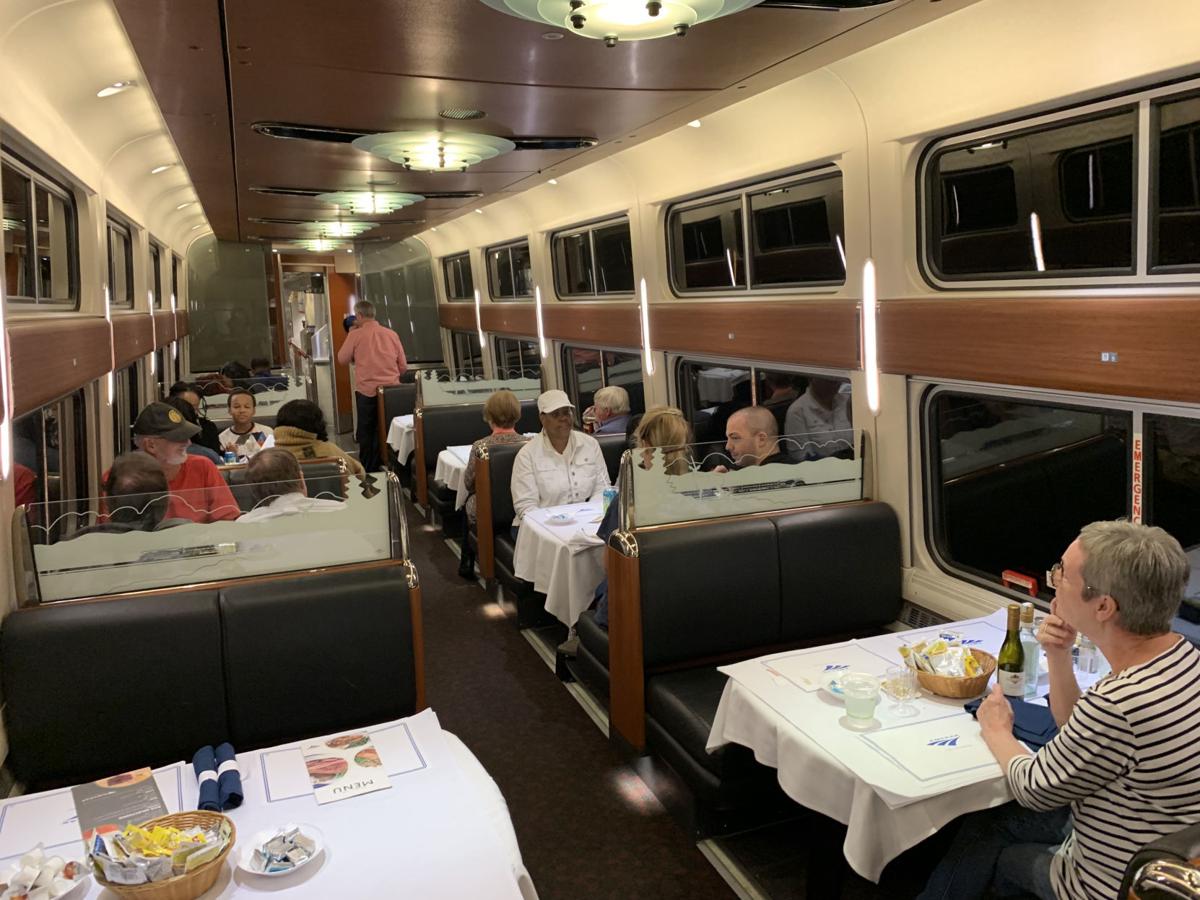 Travelers dine on the Amtrak Crescent as it rolls through Catlett, Virginia, on Sept. 9. 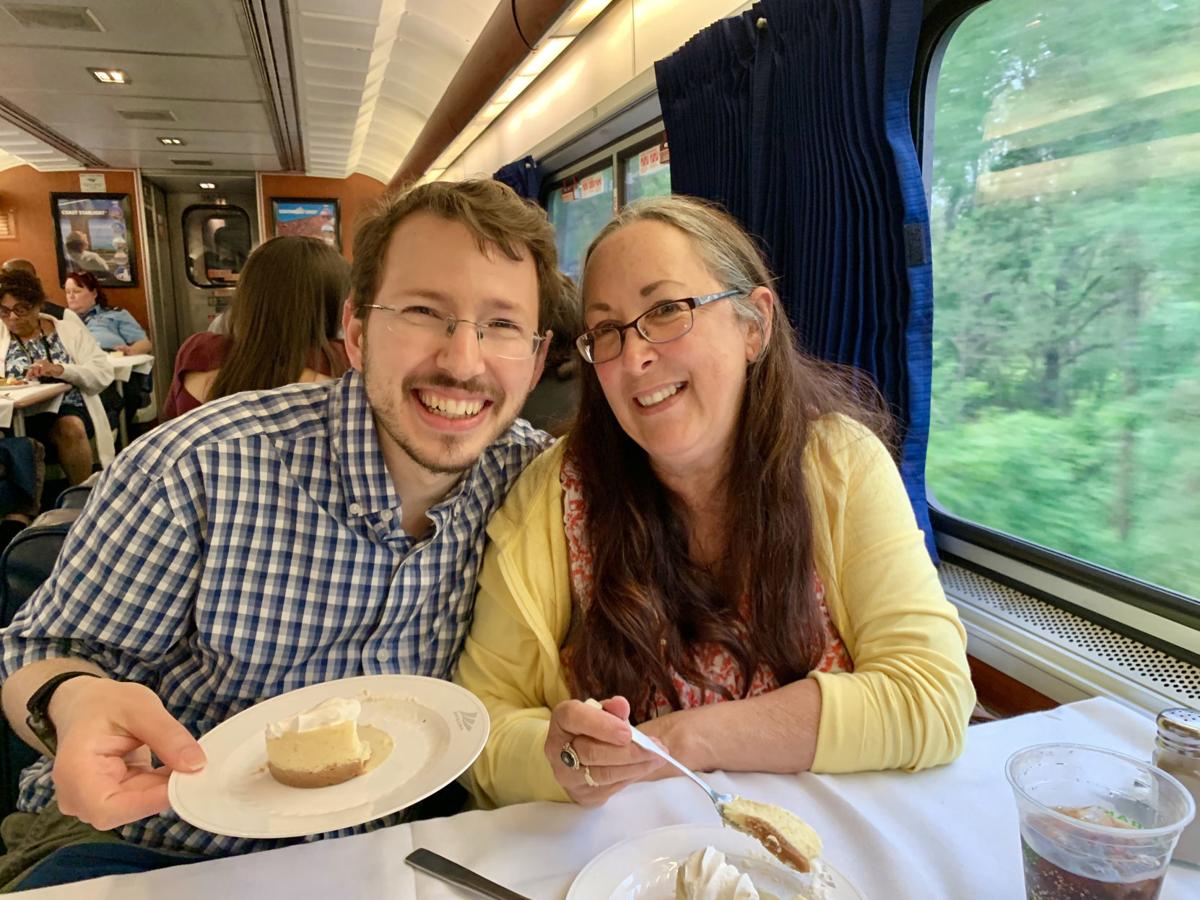 Harrison Keely and his mother, Sherrie Keely, enjoy dessert in an Amtrak dining car in June.

Harrison Keely’s most fond memories of riding Amtrak all include snapshots of the dining car. The shiny silverware and white linens. Enjoying thick slices of French toast covered with powdered sugar and drenched in syrup while taking in the scenery. The friends made over a slice of cheesecake.

“There’s something fantastic about dinner in the dining car,” said Keely, 32, a writer from Brasstown, North Carolina, who swears by the Amtrak crab cake and steak dinner. “You get to meet other people and hear so many great stories. It is to me one of the best parts about traveling.”

That experience is about to change. Amtrak says it is reinventing its dining service on long-distance trains, killing the traditional dining car to create more “flexible” and “contemporary” dining options.

The carrier says the change, starting this fall on the one-night routes east of the Mississippi River, is driven by the desire to save money and lure a younger generation of new riders — chiefly, millennials known to be always on the run, glued to their phones and not particularly keen on breaking bread with strangers at a communal table.

With the transition, Amtrak is doing away with the traditional onboard kitchen, switching to serving prepackaged meals and easing restrictions on the traditional serving times. The change allows the railroad to cut costs associated with cooking aboard and keeping up with the white-tablecloth service that was once known to rival high-end restaurants and clubs.

Amtrak isn’t labeling the change the end of the dining car, but rather an evolution more in line with the demands of this era.

“It is part of an evolution,” said Peter Wilander, who oversees Amtrak’s customer experience. “The concept is to provide service the way our customers want rather than have everybody conform to one service delivery.

“Some people really like (the dining car) and view it as sort of a nostalgic train experience,” Wilander said. “Some people, especially our new millennial customers, don’t like it so much. They want more privacy, they don’t want to feel uncomfortable sitting next to people” they don’t know.

It’s that demographic, he said, that Amtrak wants to attract with more contemporary car designs and food options.

For now, the changes are only on Amtrak’s one-night routes on the East Coast. The “flexible” dining service for sleeping car customers starts Oct. 1 on the Cardinal (New York-Chicago), City of New Orleans (Chicago-New Orleans), Crescent (New York-New Orleans) and Silver Meteor (New York-Miami). The shift will happen next year on the Silver Start — a 1,500-mile route from New York to Miami.

For passengers, it will be the end the freshly prepared meals aboard. No more eggs over easy or the favorite Railroad French toast. No more steak cooked to their liking. Travelers will no longer need to make reservations for the breakfast, lunch and dinner service hours.

Passengers in roomettes and bedrooms, considered premium riders, will have the choice to have meals delivered to their rooms. If desired, they will be able to use a new version of a dining car, open exclusively to them, with booths, but no white linens. Eventually, Amtrak said, it may get rid of the booths altogether and create a more contemporary lounge setting.

The new menu offers a variety of prepackaged meals; for example, red wine braised beef and chicken fettuccine. In the morning, passengers will be able to pick up a pastry and coffee from a buffet-style continental breakfast.

Coach riders will eventually be able to buy the meals offered to premium riders, but in the cafe car.

Wilander said the food standards aren’t taking a hit, but rather, he said, the meals will be more consistent while the ingredients remain of “high quality.” He said the process of preordering and preselecting meals will allow Amtrak to maintain tighter controls of inventory, resulting in savings.

The railroad anticipates the change will save it about $2 million a year.

Amtrak began testing boxed meals on its Crescent trains. Last year it eliminated full meals and introduced the “more contemporary” dining menu on the Capitol Limited (D.C.-Chicago) and Lake Shore Limited (Chicago-New York). Since then it has tweaked the menu based on customer feedback. Officials, learned, for example, that the public’s perception of food boxes wasn’t as favorable as it hoped, and that passengers wanted more hot food options.

So, as it expands the new dining concept, there will be five prepackaged hot meal choices and no boxes. Eventually, Wilander said, riders will be able to pick their meal online, ahead of their trip.

The new dining options are part of Amtrak’s larger vision for long-distance trains. In coming months it will be refreshing train interiors, replacing old cloth-covered seats with faux leather cushions that provide lumbar support. It will update bedding, towels and linens for sleeping cars, and debut new Viewliner II sleeping cars for trains on the East Coast, the first addition to its sleeper fleet in more than 25 years.

But the decision to scrap the traditional dining car has drawn criticism from rail aficionados, and inspired a petition — signed by about 400 people as of Thursday — urging the railroad to keep the dining car service on all long-distance trains.

These travelers say the dining car is iconic to the rail experience. While it has changed over the decades, becoming more casual with the transition from fancy china to disposable plastic plates and bowls, it remains a favorite of many.

Keely’s mother, Sherrie Keely, who grew up traveling by train, said she still remembers the days when Amtrak had cloth napkins, flowers on the table and a little silver teapot.

“It is probably one of the few places that you can travel and sit down and talk to people,” she said. While some may find the prepackaged meals convenient, she says they encourage people to seclude themselves in their roomettes and discourage one-on-one time with other travelers at the dining table.

“Of course with those boxed lunches there is no waiting time in between,” she said. That takes away the quiet time to sit down and enjoy a meal with friends.

Her son Harrison took his first Amtrak trip when he was a baby in a stroller.

The memories of every trip — from the 1996 trip to his grandparents’ 50th wedding anniversary in Philadelphia to this summer’s trip to Washington, D.C., for his grandmother’s 93rd birthday — all include a meal in the dining car.

“When I was a kid, I loved having the Railroad French toast for breakfast on Amtrak. ... My favorite meal aboard Amtrak now is the crab cake,” he said. “It comes with a steak, but I don’t eat much red meat, so I give it to another diner at the table. Recently another diner offered to order the same thing and swapped with me so I could have two crab cakes.”

But his fondness for the dining car isn’t about the food as much as the experience, he said. The time to sit down for a formal meal with views of America that can’t be seen while flying, and socializing with other travelers.

“There’s a beautiful rhythm in clacking down the tracks and an excitement in traversing a moving train,” he said. “There’s something that feels special, unique, romantic even about having dinner in the diner, sleeping on the tracks and traveling America the way it used to be seen.”