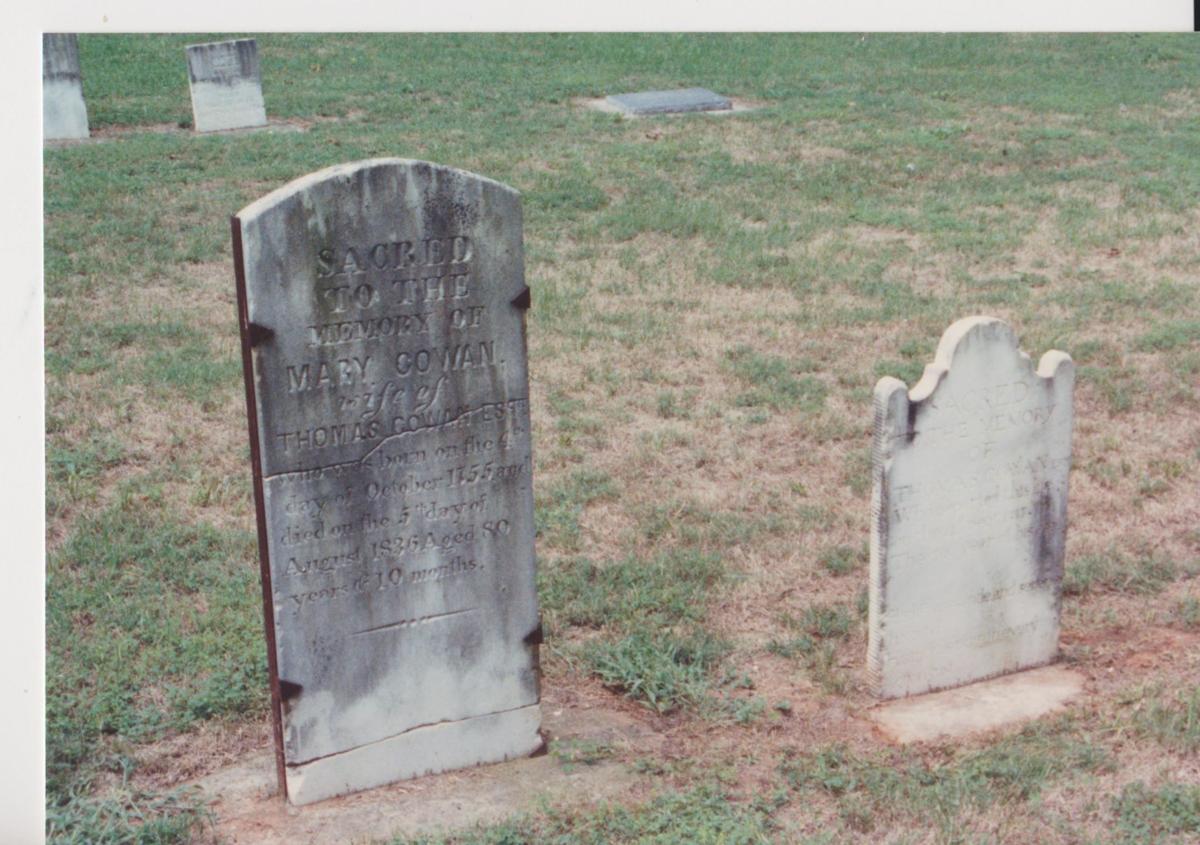 The headstones of Mary (left) and Thomas Cowan are in the Thyatira Church, Rowan County, cemetery/ 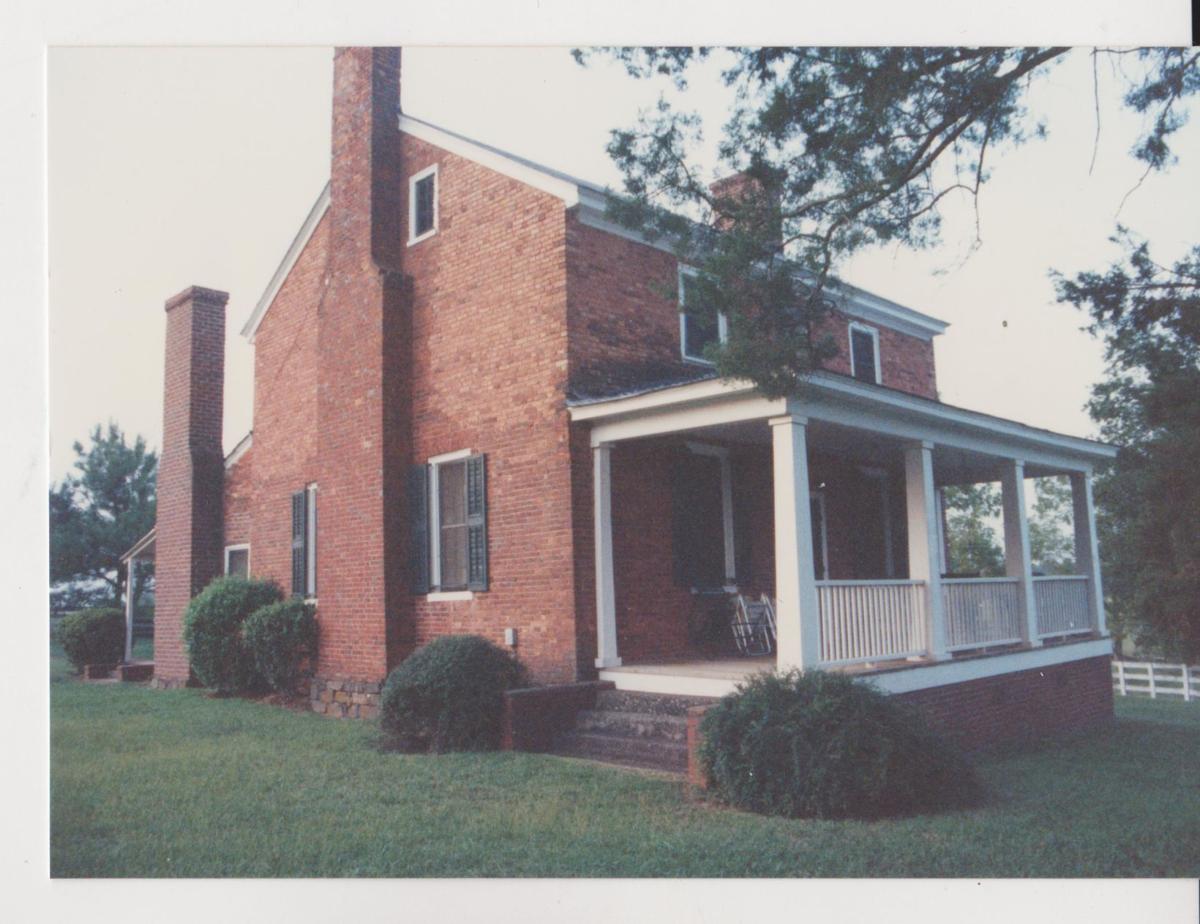 This is Wood Grove, Thomas and Mary Cowan's home at Bear Poplar in Rowan County.

The headstones of Mary (left) and Thomas Cowan are in the Thyatira Church, Rowan County, cemetery/

This is Wood Grove, Thomas and Mary Cowan's home at Bear Poplar in Rowan County.

I had not originally planned for there to be a third part to my columns on “Mount Ulla and Vicinity” which appeared last Sunday and the preceding Sunday. A tour of the cemetery at Thyatira Presbyterian Church, where I made photos and looked for the missing “pirate graves,” changed that. You see, my great, great, great, great, great-grandfather, Thomas Cowan (1748-1817), is buried at Thyatira Church beside his wife, Mary Barkley Cowan (1755- 1836), whom he married on Dec. 30, 1773.

Five “greats”? Yes, I recounted. I wonder how many people know where their g.g.g.g.g.-grandfather and grandmother are buried, or even know their names. I admit that I didn’t know their names or where they were buried until 20-some years ago, but thanks to my mother’s late brother, Paul J. Rhodes, who did the family research and shared it, I have since discovered several interesting things about my ancestor, Thomas Cowan.

Thomas was born to John and Mary Cowan in Salisbury Township, Lancaster County, Pennsylvania, in 1748. About 1750 John Cowan moved his family to Anson County in the province of North Carolina. This part of Anson became Rowan County in 1753.

People with the Cowan surname had previously lived in lowland Scotland, but around 1610 they and other lowland Scots were moved by King James I of Scotland and England (“The United Kingdom”) to the Ulster Province in north Ireland. These people would be known as the “Scots-Irish,” or “Ulster Scots,” of whom I have written previously.

In the early 18th century many of these Ulster Scots began emigrating to America. Circa 1720, four brothers with the surname Cowan sailed from County Down, Ireland, to Pennsylvania, settling in Lancaster and Chester counties. One was named John Cowan. He took the “Great Wagon Road” south in 1750 and eventually settled in piedmont North Carolina. He would be the father of a son, also named John Cowan, who would be the father of Thomas Cowan.

This second John Cowan became the owner of some 3,500 acres in North Carolina, of which 1,400 acres were bordered by the Catawba River. According to one researcher, “It was probably he who established the ford known a Cowan’s Ford to provide access to his land on both sides of the river.” Today, this property is part of Duke Energy’s Cowan Ford Dam.

It was John II’s son, Thomas, who was an officer in the Rowan County Militia during the War for Independence. Thomas fought in the battles of Ramseur’s Mill (near Lincolnton, NC), Kings Mountain (SC), Cowpens (SC) and Eutaw Springs (SC), where he was wounded. He, however, evidently made frequent trips home from militia service, as he sired 14 children and he survived the war.

Thomas was also an elder at Thyatira Presbyterian Church, a church office not bestowed lightly. When the so-called Great Revival swept the Carolina backcountry in the early 1800s, there were camp meetings, revivals, and some pretty wild behavior among the folks seized with “the Spirit.” There was also debate on the source of some of the manifestations of the Spirit.

Some churches embraced worship during which there was speaking in tongues, rolling around as if seized by epilepsy, uncontrollable laughter and other highly emotional outbursts not usually found in Presbyterian worship services.

As one source described it, “A revival was sweeping through the area with people shouting, dancing, barking like dogs, swooning and having the ‘jerks’. Thyatira’s congregation was divided on whether this was a true manifestation of the Holy Spirit. Dr. Samuel E. McCorkle--Thyatira’s pastor--believed it was not.

Five elders — the lay leaders of Thyatira, known as the Session —believed otherwise. And all left to establish a new church, while Rev. Dr. McCorkle remained at Thyatira. All of the Session went, that is, except for Thomas Cowan, who by default, became the eldest elder in Thyatira’s congregation after the other elders and 20 or 30 families left to form a new congregation, Back Creek Presbyterian Church, established on Sept. 6, 1805.

Another point of interest about Capt. Cowan: It was he, my grandsire, who was indirectly responsible for the naming of the Rowan County community of Bear Poplar.

It seems that while his plantation home, “Wood Grove” was being built — circa 1774 — Thomas Cowan spied a bear in a nearby tulip poplar tree. Like Dan’l Boone or Davey Crockett, he “kilt him a bar,” and from then on, folks pointed to the tree as “the bear poplar,” and that was the name bestowed upon the place in 1878 when a U.S. post office was established there.

Capt. Thomas Cowan passed to his reward on the 4th of December 1817, in his 70th year. His headstone at Thyatira reads, “His Life Was Gentle, And Serene, His Mind, His Morals Pure, In Every Action Just, A Husband Dear, And As A Parent, Kind.”

Oh yes, one more thing. Mary Barkley Cowan, Thomas’ wife, was a blood relative of Alben W. Barkley (1877-1956), Vice President of the United States under Harry Truman, from 1949 to 1953. Mary’s brother, Henry Barkley, Jr., was the direct ancestor of our 35th Vice President. Alben Barkley was the first man to be referred to as the “Veep.”

When you start shaking family trees, you may be surprised at what may fall out.